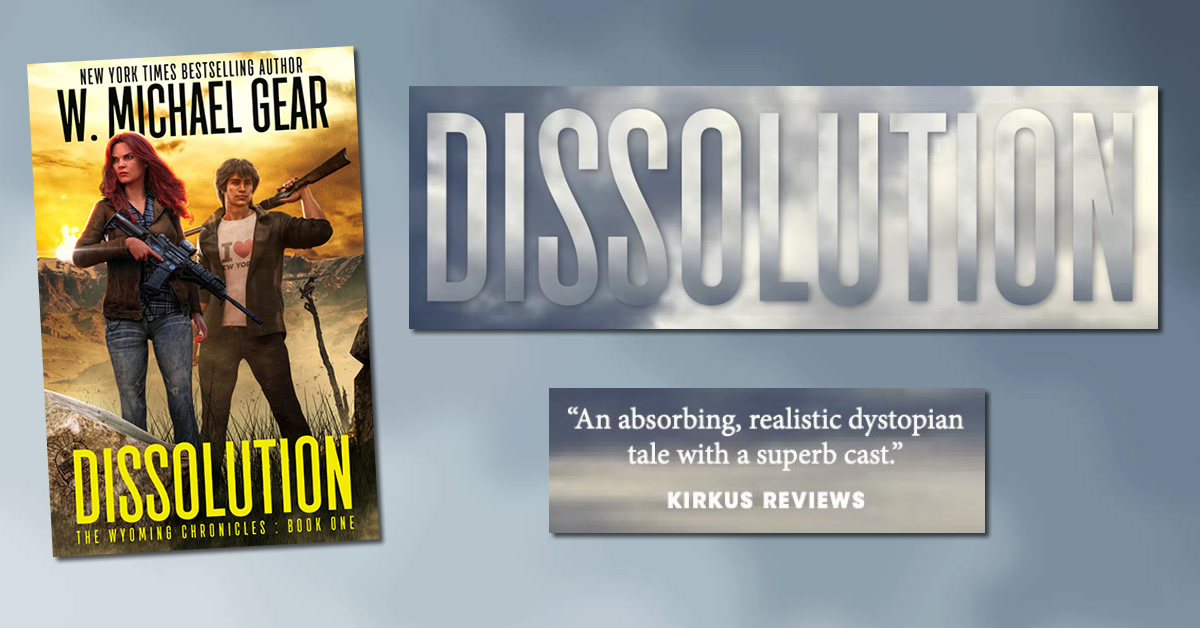 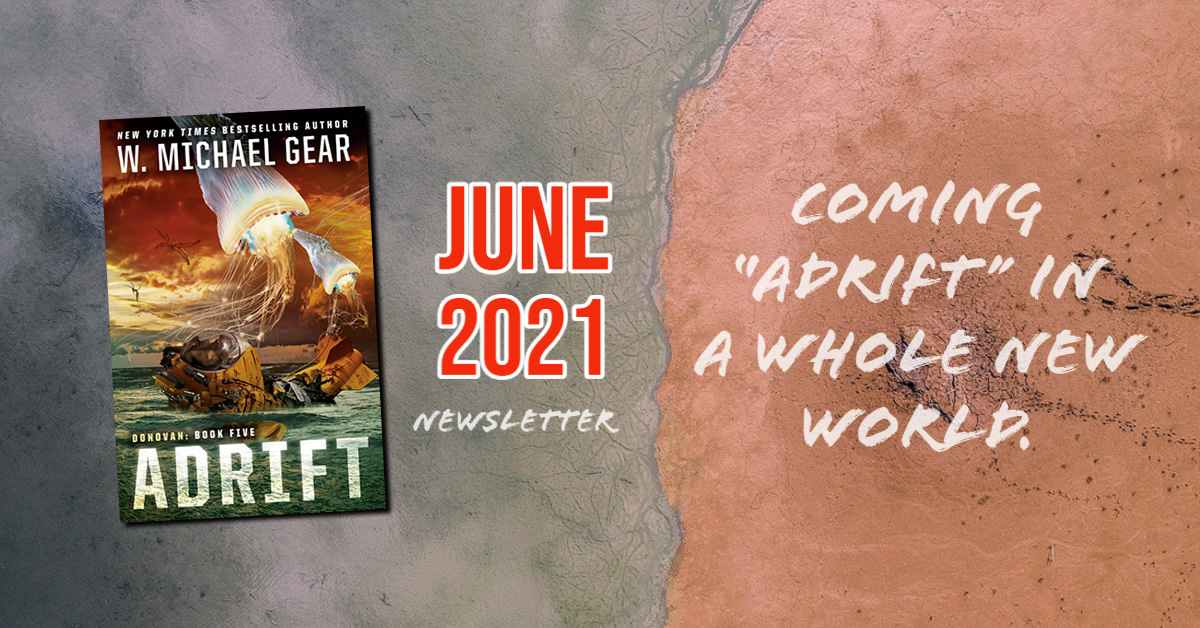 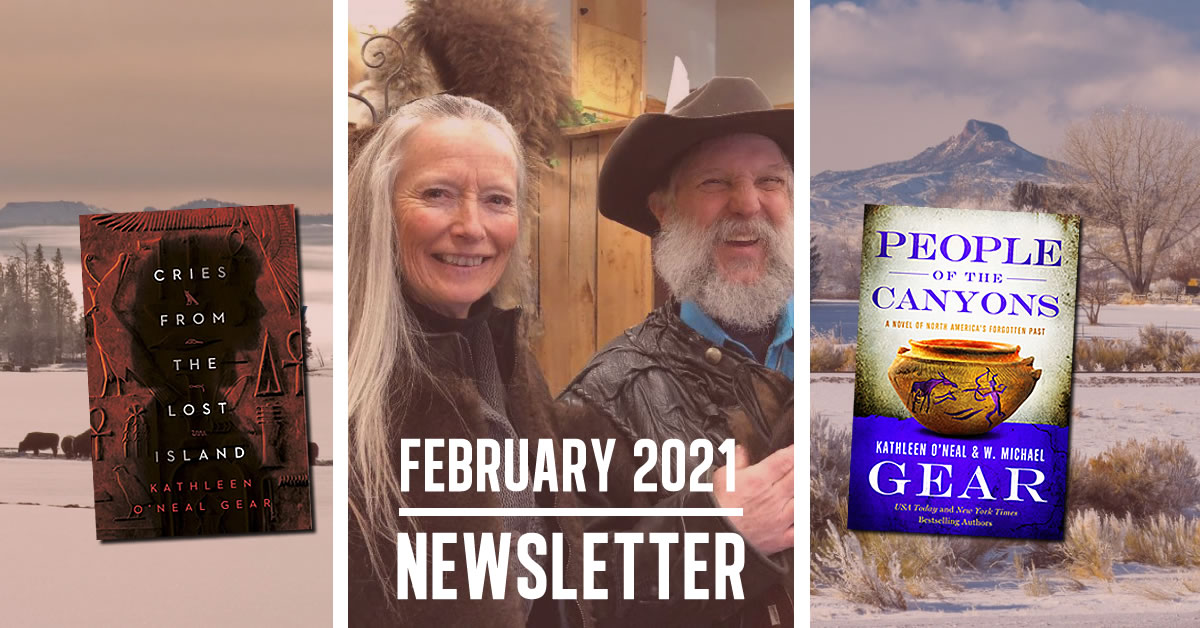 It’s a beautiful snowy day in northern Wyoming, and we’re glad to see it. This has been an especially dry winter, so we cherish every flake we get. The best part of the day has been watching the gauzy clouds drifting over the faces of the mountains and the white tailed deer leaping through the drifts in the backyard. We’re supposed to have sub-zero temperatures all next week. That means life will basically come to a halt here. Birds will hide in the trees and animals find warm spots to stay put until the worst passes. More and more, we are all dreaming of spring.

Thanks again to everyone for all your emails and cards. We’ve been overwhelmed by the outpouring of congratulations we’ve received after winning the Western Writers of America’s “Owen Wister Award” for outstanding contributions to Western literature. We’re still a little dazed. And honored. And humbled. As promised, we will let you know the date for our upcoming installation in the Western Writers Hall of Fame. Hopefully it will be a warm June day.

The international best-selling writing team of W. Michael and Kathleen O’Neal of Cody, Wyo., will receive the Western Writers of America 2021 Owen Wister Award for Lifetime Contributions to Western Literature.

The Gears, who are best known for their prehistory series of books, will also be inducted into the Western Writers Hall of Fame, housed outside the McCracken Research Library at the Buffalo Bill Center of the West in Cody.

“For more than three decades, Kathleen and Michael Gear have been bringing the past to vivid life with their books about the indigenous peoples. Both individually and as a writing team, their work stands out for its focus and readability,” said WWA President Chris Enss. “The Wister Award was created for such talent.”

Added WWA Executive Director Candy Moulton: “Michael and Kathleen, with their careers in archaeology and as award winning bison ranchers, bring extraordinary understanding and passion to everything they write whether the subject involves the prehistory of America, or the genetics of bison.”

The nonprofit guild’s highest honor will be presented during WWA’s convention June 16-19 in Loveland, Colorado.

Well, it’s been an interesting and challenging year, hasn’t it? With the daily bombardment of COVID updates and the election news, we feel like we’ve been hit in the head with a rock. We have to admit, we’re looking forward to seeing 2020 in the rearview mirror.

The past two years have been a little overwhelming for us, so please forgive us for not writing more. Mike’s mother was ill with heart problems for several years, then she passed away in June of 2019.  Three weeks later we sold the ranch. Five weeks later we sold Mom’s house. Five months later we sold our office in Thermopolis. A month after that, we started moving to Cody, Wyoming. All of that means that it’s been a whirlwind of painting, doing repairs to properties, settling Mom’s estate, packing and moving 30,000 books to our new home in Cody, plus all of the other small things that must be done to create a new life in a different place. And in the midst of all that, we wrote four books.

In March of 2020 Kathy’s Young Adult fantasy novel, CRIES FROM THE LOST ISLAND came out.  In May, Mike’s science fiction book, UNRECONCILED was released (to rave reviews, we might add).  In June, our co-authored novel, PEOPLE OF THE CANYONS hit the shelves.  Finally, last month, Mike’s book ALPHA ENIGMA was released.

THE GOOD NEWS! We are celebrating the publication of PEOPLE OF THE CANYONS, and what a great job Nancy Peterson did on the audio version with her reading of the novel. She caught the essence of Tsilu and most particularly, Blue Dove’s condescending arrogance. As we come closer to the end of the “People” books, we are both saddened, and rewarded. Not many series last through thirty novels spanning three decades. We are delighted to have brought ancient Native America to millions of readers around the world. If you haven’t read PEOPLE OF THE CANYONS, it is currently available in hardback, audio, and e-format.

And yes, LIGHTNING SHELL is still scheduled for delivery to Forge Books next summer. With it we will bring the Cahokia series to a conclusion.

Also recently released are Kathleen’s CRIES FROM THE LOST ISLAND, which came out in March, and UNRECONCILED, the 4th Donovan book.

CENSORSHIP: On a more stormy front, we are engaged in a fight that we never would have believed possible. Not in America. Not with—of all people—a publisher who claims to champion the First Amendment and free speech. It’s still hard to believe this is really happening.

Michael’s ALPHA ENIGMA is scheduled for publication on November 3 this year. Maybe. Penguin Random House—within which, DAW Books resides—now has a censorship committee. Yes, you read that correctly. And they have targeted ALPHA ENIGMA over “sensitivity concerns.”  They have identified certain characters, dialog, descriptions, and situations as “troubling.” As a result, Michael is being asked to make significant changes to the novel—a sort of “literary cleansing” that apparently will make it less objectionable to anyone who might be, well, “sensitive.” If the changes are not made, PRH will force DAW Books pull the book from the November list. Essentially, ban it.