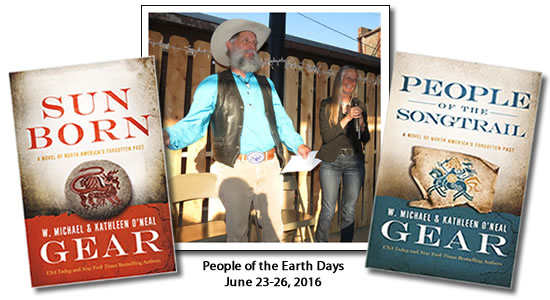 It is with great pleasure that we announce the completion of the third book in the Morning Star series!  We have delivered Morning Star: Moon Hunt to our editor at Tor/Forge Books. Once again we’ve been delighted to share our time with Blue Heron, Fire Cat, and Night Shadow Star. Seven Skull Shield, however, still insists on composing bawdy songs, and worse, shows no remorse for doing so!

One of the delights inherent in what we do comes from bringing different aspects of American archaeology to life for our readers. While much of the plot in Moon Hunt revolves around Cahokian politics and the choosing of a new Four Winds Clan Matron, most of the story was inspired by the famous “Mothra” Hightower Style shell gorget recovered from Mound C at the famous Etowah site in Georgia.

A gorget is a medallion worn around the neck--and in the case of the Etowah Mound C gorget, it was carved from round section cut from either whelk or conch shell traded up from the Gulf of Mexico. The “Mothra” gorget depicts a winged man with raptor feet who is wearing a decorative apron. For the purposes of our books, he is identified as the mythical Morning Star from so much of Native American mythology. His mouth is accented by a forked design, and his headdress sports deer antlers to the rear while the back half of a raccoon hide hangs forward over a beaded forelock. In his left hand he holds a long blade.  Most fascinating, however, is the monstrous moth he clutches by the proboscis in his right. Why, of all creatures, would the Morning Star be in combat with a moth?

Not just any run-of-the-mill moth, but a Carolina sphinx moth, or Manduca sexta as it is known scientifically. This particular sphinx moth specializes in the nectar found in tobacco, jimsonweed, and sacred datura flowers. In the larval stage, its caterpillar--known as a hornworm--eats the toxic leaves from these same plants.  In Native American ritual, the use of these plants opens doors to the Spirit World.

Getting a glimpse of how the Morning Star could run afoul of such a creature?

To find out, you’ll just have to wait to read Morning Star: Moon Hunt.  Currently the publisher tells us that it will be published in December of 2017.

In addition to finishing Morning Star: Moon Hunt, we have sent a couple of book proposals to Tor/Forge for their consideration. Kathleen is waiting for comments from her editor before tackling revisions on her thriller, Maze Master, for Thomas Dunne Books. Michael has been sending the manuscript version of Touch of Sanity to various authors and historians for review. So far he’s forwarded twelve superlative jacket quotes and reviews to the publisher with more to come.

For all of you who are asking, “When’s the next book coming out?” we are pleased to announce:

People of the Songtrail will be released in mass market paperback in September of this year. You can place your preorders now with your local bookstore or online merchant. No doubt it will be refreshing after a long hot summer to get back to spending time with Godi Gunnar and Thyra.

And finally, Morning Star: Sun Born will be published in October of 2016. This second book in the Morning Star series will be available in hardback and eformat. You can place your preorder now. Die hard fans might want to reread People of the Morning Star just to refresh their memories of Seven Skull Shield, Fire Cat, and Night Shadow Star.

At the end of this month we will be hosting PEOPLE OF THE EARTH DAYS III here in Thermopolis. For three days spanning June 24th to 26th we will be exploring the geology, archaeology, paleontology, and natural history of the Southern Big Horn Basin. (And yes, Meri Ann will take last minute registrations at the door.)  In addition we will be reading from unpublished work, discussing the writing process, and sharing the unique companionship engendered by our fans.  On Sunday, June 26th at 3:00 we are pleased to welcome Lucia St Clair Robson, Kat Martin, Larry Martin, and Dr. Steve Horn as our special guest authors at the book signing at Storyteller Bookstore here in Thermopolis.  See thermopolischamber.org for more details and registration information.

Starting July 4th we will be in New York for our yearly ThrillerFest week, which includes publisher meetings, enjoying the fellowship of other authors, and our annual dose of culture shock in the big city.  Michael will be on a Saturday 1:00 pm panel entitled “The Middle Ages or WWII: The Historical Thriller.”  He will be at the book signing at the conference bookstore in the Grand Hyatt at 4:30 to 5:15. See ThrillerFest.com for more details.

After that, it’s back to the keyboards, fixing fence, and making some repairs on the corrals, painting the guest house, and some other summer chores.

Meanwhile, here at Red Canyon Ranch, we’ve had a wonderful spring powered by an unusually rainy April and May. The hills are popping with a vivid green, and even some of the seeps are running again after twenty years. At last count we had fifteen bison calves on the ground, and are hoping for a few more from a couple of late cows.

Stay tuned: Come the Fall newsletter, we should have some fascinating new information on forthcoming titles and projects. Until then, if we could wish you anything, it would be: Read in Health!