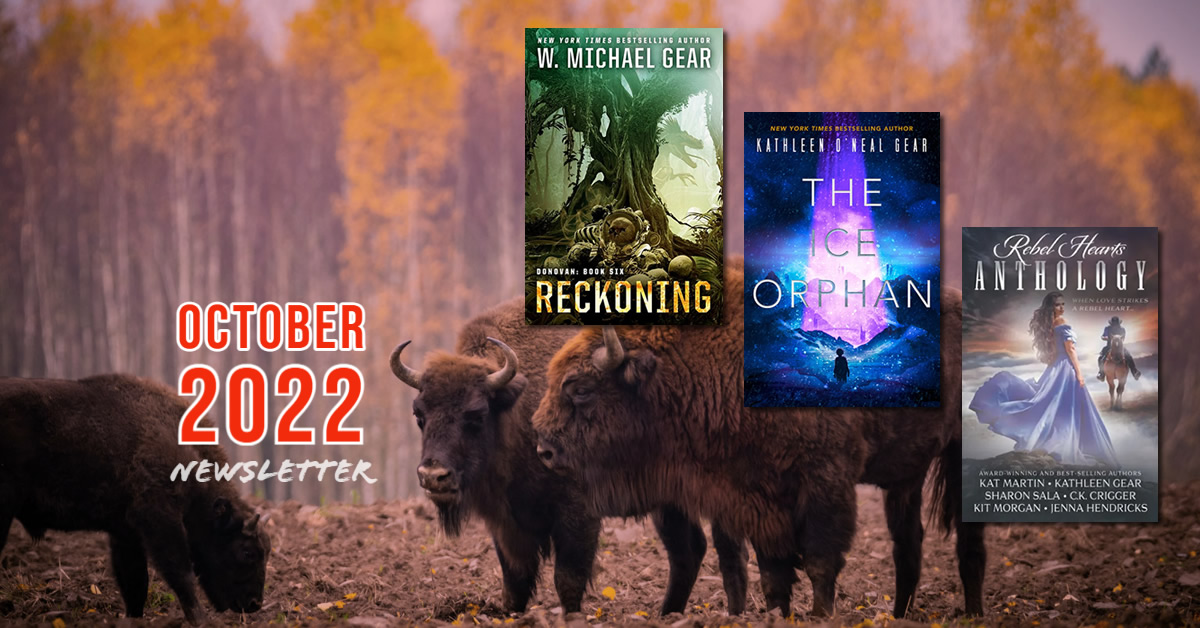 Happy October to All!

The mountains around us are a patchwork of gold and green, and our yard is filled with deep red Chokecherry trees and brilliant yellow aspens. In the sunlight, the leaves all seem to glow from an inner fire. It’s all just beautiful.

We just returned from celebrating our 40th anniversary (sheesh, time to diet) and have been harvesting the last of the potatoes, which are delicious. Also been mourning the fact that the tomatoes we planted needed a much longer growing season than they received in this northern country. Of course, the raccoons sleeping on the plants probably didn’t help. But the fried green tomatoes we picked are excellent, especially as an accompaniment to buffalo burgers. By the way, the buffalo are looking shaggy, losing their summer coats, and preparing to grow a heavy, winter undercoat, which consists of some of the finest cashmere in the world. They always seem relieved that cold weather has returned.  When the biting flies vanish and the dust of summer fades, they run across the pastures kicking up their heels and bounding through the tan grasses.

It’s been an interesting month of censorship here in America.

With the election coming up, we started posting historical quotes from a variety of past leaders, good and bad, Abraham Lincoln, Thomas Jefferson, Martin Luther King, Pol Pat, Stalin, Hitler, and others. Twitter didn’t even blink. They posted the quotes. LinkedIn questioned one post, removed it, reviewed it, then approved it and posted it again. Facebook however, went berserk and removed all of our Facebook sites, including our Facebook Fan Club site, created and managed by the wonderful and amazing, Theresa Hulongbayan. It’s ironic that the Hitler quote that so disturbed the Facebook censors was, “What good fortune for governments that the people do not think.”

We have to tell you, this sort of censorship makes us despair.  We must learn from the past.

Making Adolf Hitler disappear from Facebook is dangerous. The new PBS documentary, “The U.S. and the Holocaust,” is a powerful reminder of why he should be studied by every student in the world, and by every person who cares about the future of humanity.

So, we are in Facebook hell until December 13th, when the censors will decide if our Facebook Fan Club should exist at all. And we must decide if we want to endure Facebook’s censorship.  In the meantime, Theresa has established a new account at Reddit, and we are trying to rebuild the fan group on a social media platform that seems to be more tolerant of history. Please join us at: https://www.reddit.com/r/Gearfansite/

On a happier note, the Holiday Season is coming up fast and we have three new books coming out!

RECKONING, Book 6 in the Donovan series comes out on November 8th.

THE ICE ORPHAN, Book 3 in the Rewilding Reports, is coming on November 22nd.

REBEL HEARTS ANTHOLOGY – This anthology includes a short story by Kathleen set at the Alamo in 1836, the best short story she’s ever written. Really. COMING ON DECEMBER 20th.

And don’t forget, for signed copies, you can contact either the STORYTELLER (https://www.storytellerwyo.com) or LEGENDS BOOKS (https://www.legendsbooks.com) 1-307-586-2320.

We send everyone our heartfelt best wishes for a warm and happy holiday season surrounded by the people you care about.