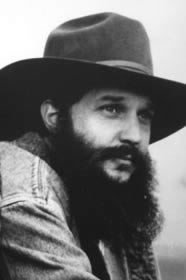 W. Michael Gear was born in Colorado Springs, Colorado. A fourth generation Colorado native, his family had been involved in hard-rock mining, cattle ranching, and journalism. After his father's death in 1959, Michael's mother received her Master's degree in journalism and began teaching. In 1962 she married Joseph J. Cook, who taught tool and die making, and the family lived in Lakewood, Colorado, until 1968. At that time they moved to Fort Collins so that Joe could pursue his Ph.D.. During those years the family lived in the foothills above Horsetooth Reservoir.

It was there that Mike developed a love of history, anthropology, and motorcycles. They would color his future and fill his imagination for the rest of his life. During summers he volunteered labor on local ranches or at the farm east of Greeley and landed his first real job: picking up trash at the lake and cleaning outhouses. It has been said that his exposure to trash led him into archaeology. We will not speculate about what cleaning the outhouses might have led him to. On his first dig as a professional archaeologist in 1976 he discovered that two thousand year old human trash isn't nearly as obnoxious as the new stuff.

Michael graduated from Fort Collins High School in 1972 and pursued both his Bachelor's (1976) and Master's (1979) degrees at Colorado State University. Upon completion of his Master's - his specialty was in physical anthropology - he went to work for Western Wyoming College in Rock Springs as a field archaeologist.

It was in the winter of 1978 that he wrote his first novel. Irritated by historical inaccuracies in Western fiction, he swore he could do better. He was "taking retirement in installments," archaeology being a seasonal career, in the cabin his great uncle Aubrey had built. One cold January night he read a Western novel about a trail drive in which steers (castrated males) had calves. The historical inaccuracies of the story bothered him all night. The next morning, still incensed, he chunked wood into the stove and hunkered over the typewriter. There, on the mining claim, at nine thousand feet outside of Empire, Colorado he hammered out his first five hundred and fifty page novel. Yes, that first manuscript still exists, but if there is justice in the universe, no one will ever see it. It reads wretchedly - but the historical facts are correct!

Beginning in 1981, Michael, along with two partners, put together his own archaeological consulting company. Pronghorn Anthropological Associates began doing cultural resource management studies in 1982, and, although Michael sold his interest in 1984, to this day the company remains in business in Casper, Wyoming. During the years, Michael has worked throughout the western United States doing archaeological surveys, testing, and mitigation for pipelines, oil wells, power lines, timber sales, and highway construction. He learned the value of strong black coffee, developed a palate for chocolate donuts, and ferreted out every quality Mexican restaurant in eight states. He spent nine months of the year traveling from project to project with his trowel and dig kit, a clapped-out '72 Wonder Blazer, and his boon companion, Tedi, a noble tri-color Sheltie.

That fateful day in November, 1981, was delightfully clear, cold, and still in Laramie, Wyoming. Archaeologists from all over the state had arrived at the University of Wyoming for the annual meetings of the Wyoming Association of Professional Archaeologists. It was there, in the meeting room, way too early after a much too long night, that Mike first laid eyes on the most beautiful woman in the world: Kathleen O'Neal Gear. The BLM State Archaeologist, Ray Leicht, introduced him to the pretty anthropologist and historian, and best of all, Ray invited Mike to lunch with Kathleen. It was the perfect beginning for a long and wondrous relationship. Not only does Ray make a mean violin, he's not half bad as a matchmaker either. Michael and Kathleen were married on October 1, 1982.

As a result of changes in Federal policy, the long hours away from home, the ever growing dream of writing full time, Michael sold his interest in Pronghorn Anthropological Associates in 1984.

All through 1985 Mike wrote full time while Kathy worked for another year. Many of her colleagues asked, "But has he made any money yet?" Finally, in 1986, Kathy left the Bureau of Land Management and the two of them moved to the Colorado cabin at Empire. For the next three years, with no running water and only two wood stoves for heat, they pounded out novel after novel. Mike wrote eight before he finally sold one. Kathy wrote five non fiction books, and sold the first novel she ever pitched.

The hard work paid off in March of 1987 when Tor Books bought LONG RIDE HOME on Thursday and DAW Books bought the Spider trilogy the following Tuesday. Kathy made her first sale that summer, and they were on their way. In answer to Kathy's one-time colleagues, it would seem that he can pay the bills after all.

In all, Michael has published twelve novels under his own name and co-authored another thirty-four with Kathleen. His work runs the gamut from historical, to prehistorical, to science fiction, to modern thrillers. All of his work deals with some aspect of anthropological theory. His MORNING RIVER was nominated for the Pulitzer prize in fiction, and the National Book Award in 1998. THIS SCORCHED EARTH was a Spur Award Finalist in 2019, as well as having been submitted for the Pulitzer and National Book Awards.

Authorities in the bison industry, with numerous publications on bison genetics, health, and management Michael and Kathleen ran Red Canyon Ranch for 28 years, and were twice were presented with the coveted Producer of the Year by the National Bison Association in 2006 and 2009.