Ancient Bison Hunting 2,500 Years Ago in Alberta and Montana 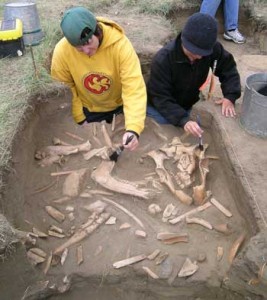 Around 2,500 years ago, just north of the Montana border in Alberta, two groups of prehistoric hunters from what archaeologists call the Besant Culture and the Sonota Culture surrounded a marsh. The marsh nestled in the midst of sand dunes left over from the retreat of the enormous lakes that had existed during the Pleistocene Ice Age, 8,000 years before. Bison were grazing the marsh.

The hunters carefully set up their ambush. It must have been similar to hunting bison in snowdrifts. Bogged down, slogging through the mud, the bison couldn’t run as fast, making them easy prey. The hunters were using atlatls, spear throwers, and spears about as long as they were tall. Both groups had probably recently been in what is today North Dakota, because 75% of their spear points were made from a unique flint native only to the Dakotas, Knife River flint.

Launching a spear with an atlatl gives a hunter about two-hundred times the energy of throwing a spear by hand. They likely sneaked through the grass until they were close enough, then raised their weapons and cast their spears in a coordinated attack.   The ambush was very effective. They killed and butchered 65 bison. In the process, they lost 118 spear points, which were recovered during the archaeological excavations that took place between 2004-2012.   When the excavations were over, archaeologists had catalogued over 200,000 fragments of bison bone.

But the most interesting things about this site were the mysterious bison bone sculptures, features called bone “uprights,” meaning bones that have been deliberately set on end by human beings. Uprights served a variety of purposes: to prop a pot over hot coals, serve as the rib-like frame of a lodge, stake down a tipi bottom, peg hides for fleshing, etc. They are rare discoveries in archaeological sites. But the bone sculptures at the Fincastle site were more than rare, they were incredible one-of-a-kind finds.

To create one of the most intriguing sculptures, the hunters took four bison jaw bones and one lower leg bone (tibia), stood them on end to form a unique display, then buried it, or shoved it in the ground. Was it an artistic act designed to honor the sacred remains of the bison that sustained their peoples? Maybe. But since the buried sculptures would not have been visible to human beings walking the ground surface, they may also have been offerings to ancestors living in the underworld Land of the Dead, possibly thanking them for the gift of the bison.

No one will ever know for certain, but hopefully future excavations of Besant and Sonoto sites will shed further light on these fascinating discoveries.

Read more about it:

This is such a tragedy.  The story of the Lone Woman of San Nicolas Island deserves to be told.  Apparently,  the problem here was an inadvertent violation of Section 110 of the Native American Graves Protection and Repatriation Act. 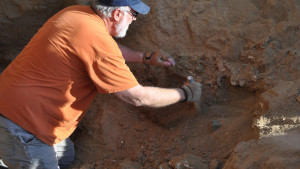 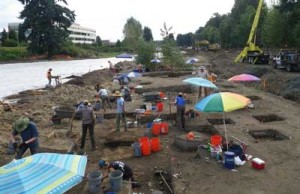 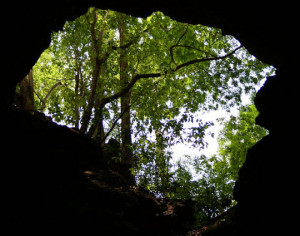 In the 1970s a French archaeologist made a dramatic new discovery in a cave in Brazil: the 12,000 year old remains of a woman, about twenty, with very different physical characteristics from other peoples in the Americas at the time.  After careful study, a number of archaeologists speculated that she was Australoid or even African, which sparked a debate that has yet to end.  How did she get here?  Certainly not across the Bering Strait land bridge or remains from her population would have been found in North America.  Across the ocean?  Well, that would imply extraordinary watercraft skills.   12,000 years ago?  Really?!

While archaeologists are still debating Luzia, recent studies have re-dated her remains to a maximum of around 11,700 years ago.

She is still an archaeological rarity, and one of the most fascinating sites in the Americas.

Read more about it:  https://journals.uair.arizona.edu/index.php/radiocarbon/article/view/16253

What killed the mammoths and mastodons? Human hunters or climate change? 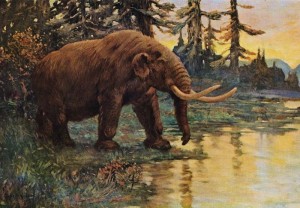 It’s not like this is a new discussion in archaeology.  Archaeologists have been debating this question for almost a century.  The evidence is strong that megafauna extinctions were caused by a mixture of climate change and human hunting, and that human hunters were here on the continent long before the famed Clovis culture arrived.  There are four verifiable pre-Clovis mammoth and mastodon sites in North America now: The Schaefer and Hebior sites in Wisconsin, the Manis site in Washington, and the Page-Ladson site in Colorado.  As well, there are several tantalizing sites that seem to date back more than 40,000 years.

But who were the hunters who came before Clovis?  Ah…that’s a good question. 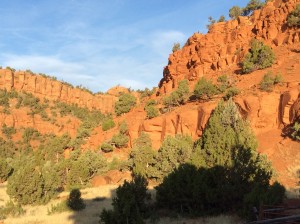 It’s such a pretty day here.  We swear the Chugwater sandstone glows in spring sunlight.  The red color comes from its high iron content.  This particular sandstone dates to around 200 million years ago, right after the Permian extinctions (@250 million years ago) when 90% of all life on earth died.  The Chugwater tells geologists that Mother Earth was working hard to renew herself. 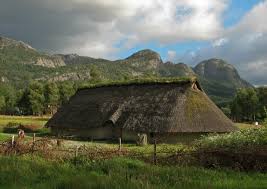 Ever wondered what Viking houses looked like?  Well, construction techniques depended upon the time period and geographical location.  This was a typical Viking house in Europe around AD 1,200.  However, Viking houses in North America around AD 1,000 looked like the one below found at the L’Anse aux Meadows site in Newfoundland.  L’Anse aux Meadows is a UNESCO World Heritage site.  This is a delightful site to visit, by the way.  In the summer, they have living history programs that are just fabulous.

We are really looking forward to hearing Mike Blakely play music tonight in #Thermopolis, Wyoming.  He is so multi-talented–award-winning writer and award-winning songwriter–we can’t wait.  Good excuse, too, for a Friday night on the town before the concert starts! 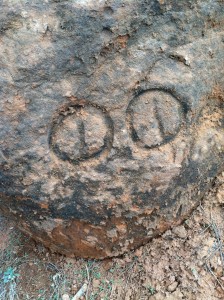 At first glance this prehistoric petroglyph, rock carving, might look like eyes.  When you get close, however, you can tell that it’s actually buffalo hoof prints.  Above the prints are four carefully ground dots.  You can see two in this photo.  These are found about a five minute walk from our front door in a box canyon.  What do they mean?  Well, we wish we knew.  We suspect they are from the Late Prehistoric Period, which means made within the last 1,000 years.  Interestingly, this is the one side canyon on the ranch where prehistoric peoples could have trapped buffalo.  Is that what the petroglyph documents?  “We trapped buffalo in this canyon four times.”   No one will ever know, but the petroglyph is a constant reminder that buffalo have been here a long time, and native peoples used them to feed their families.

Thanks to Mike and Annie Blakely for taking this great shot.  Ours aren’t nearly as good!

Wild turkeys are so interesting… 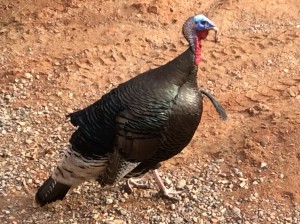 We have one wild turkey–we’ve named him Freddy–who stands by the backdoor waiting for us to come out to walk the dogs so he can join us on our walks, gobbling.  He’s also started pecking at the door to ask that we toss him a cup of sunflower seeds.   We have not trained him to do these things.  Clearly, Freddy has trained us.

Which is a little unnerving.