Typical day in the life of writers… 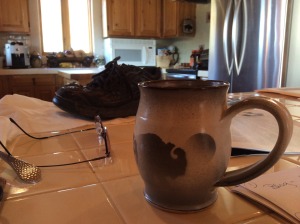 Yes, this is the kitchen counter with the usual clutter, coffee cup, notepad, tennis shoes nested amid banana bread crumbs, copy of Science News, and reading glasses.  All within reach of the computer.  Are all authors total slobs?

Caring for animals and plants? Basic to what it means to be human?

Ranch life is interesting.  When we go out to feed the buffalo, it’s always hard to leave them.  There’s something calming about feeding and caring for animals and grass.  We suspect it’s some primal agricultural impulse, some ancient knowledge imbedded in the very genes that make us human, that tells us that caring for animals and plants IS survival.  Just petting a dog or cat touches that same need to protect and care for the animals who mean so much to our psychological life, we think. 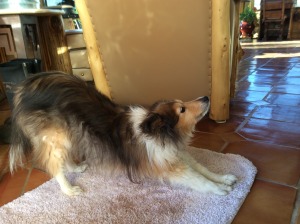 Shannon stretching in the sun streaming through the open door.  Our house is oriented so that the main door faces the east, which means warm sunlight falls on Shannon’s rug and eases some of the pain in her arthritic joints.

The internet and “Anti-stress” laws in Germany

Al-Baghdadi’s Version of “Shock and Awe.”

Congressional staffer Brent Budowsky argued in an article in The Hill that it is “highly probable” ISIS will obtain nuclear, chemical, biological or other weapons of mass death to use in attacks against the United States. Four-star general John Allen put it even more bluntly, “World War III is at hand.”

One of the unpleasant ironies of being archaeologists and historians of religion is that we can’t see a faith outside of its historical context, which often creates a kind of painful spiritual whiplash. That’s especially true these days for Islam, a religion dedicated in part to understanding God’s revelation to Jesus: Love thy neighbor as thyself.

Muslims say that God’s revelation has proceeded through four great stages. First, God revealed the truth of monotheism to Abraham: There is no God but God. Second, Moses revealed the Ten Commandments to guide moral behavior. Third, God taught Jesus the Golden Rule that we are to love our neighbors as ourselves. For Islam, all these men were true prophets. But there was a question that remained to be answered, and that question was how we should love our neighbor? A final prophet was needed to reveal that truth. Mohammed.

With all the horror being created in the world by people calling themselves Muslims, it might be worthwhile to ask what Mohammed taught about loving our neighbor? Did it include mass executions, beheadings of foreigners, and starving and driving innocent civilians from their nations? Keep in mind the Koran is not merely a spiritual document it is a moral and legal ordinance. What would Mohammed think of ISIS destroying churches and mosques, and murdering those who refuse to accept its version of Islam? Is that loving thy neighbor as thyself? The crucial sacred verses (ii:257) instruct:
“Let there be no compulsion in religions.
…If God had pleased, he would have made you all one people. But He hath done otherwise that He might try you in that which He hath severally given unto you: wherefore press forward in good works. Unto God shall ye return, and He will tell you that concerning which ye disagree (v:48). Unto you your religion, and unto me my religion (cix:6).”

In fact, perhaps the first document acknowledging religious freedom and tolerance in the world was Mohammed’s charter to the people of Medina, which said, “The Jews who attach themselves to our commonwealth (similar rights were later granted to Christians) shall be protected from all insults and vexations; they shall have an equal right with our own people to our assistance and good offices: The Jews…and all others domiciled in Yathrib, shall….practice their religion as freely as the Muslims.” He also said, “Wilt thou then force men to believe when belief can come only from God?”

As a demonstration of this tolerance, when Christian emissaries once came to Mohammed he invited them to conduct their services in his mosque, saying, “It is a place consecrated to God.” Meaning their God, too.

In his classic work, The Religions of Man, religious scholar Huston Smith wrote, “Muslims see the record of Christianity as much darker than their own. Who was it they ask, who preached the Crusades in the name of the Prince of Peace. Who instituted the Inquisition, invented the rack and the stake as instruments of religion, and plunged Europe into its devastating wars of religion?” Not Islam. But Christianity.

So, maybe we should ask al-Baghdadi… Who was it who launched jihad in the name of Mohammed? Who instituted the slaughter of the innocent, cast aside the Brotherhood of Islam, used instruments of torture as tools of religion, and plunged the Middle East into devastating religious war? Who was it who drove a stake into heart of Islam and cast its people asunder?

Al-Baghdadi isn’t the first and won’t be the last “Muslim” leader to ignore Mohammed’s words in his farewell pilgrimage to Mecca, where he said, “O ye men! Harken unto my words and take ye them to heart! Know ye that every Muslim is a brother to every other Muslim, and that ye are now one brotherhood.” There have been so many—of every faith–over the centuries who have believed themselves the anointed of God on a holy mission to cleanse the world, but Abu Bakr al-Baghdadi and monsters like him seem to want to hurl Islam back to a pre-Koranic inter-tribal morass of violence–to the Days of Ignorance–before the birth of the Prophet.

Slaughtering and persecuting the innocent is a fundamental misunderstanding of the Prophet’s most simple belief: “Turn away from evil with that which is better” (xlii:37).

We are looking forward to being at the Gilcrease Museum in Tulsa, Oklahoma on Sept. 6th at 4 PM and Sept. 7 at 3 PM, talking about “Thirty Years of Writing America’s Archaeological Heritage.” Please join us, it should be a lot of fun!

We are having such fun experimenting with TUMBLR. Who knew there was a place for scientists to actually exchange and comment on information in a way that’s conversational? We’re loving this! Please join us at: http://gear-books.com/

Great time at PEOPLE OF THE EARTH DAYS in Thermopolis, Wyoming

Hi All! Well, the first ever PEOPLE OF THE EARTH DAYS is over, but we’re still smiling. We met so many wonderful people, and we had such fun! We have to tell you, the events were spectacular, but from a personal perspective, our favorite was the ice cream and coffee hour at the Black Bear Café. Intimate, one-on-one, that was special for us. However, the trips to Legend Rock Petroglyphs, Wind River Canyon, and the Wyoming Dinosaur Center were like little mini-vacations. We are grateful to have had the expert guidance of John Fish, Barb Vietti, and Greg Willson. Each event was so different, and so educational, we loved each one. The Thermopolis Chamber of Commerce is already working on how to make it better, with new and fascinating events. Thanks tremendously to all of you who filled out the comment cards. The Chamber is listening! Your observations and recommendations DID count. If you’re considering attending next year, please go to: thermopolischamber.org, and click on PEOPLE OF THE EARTH DAYS, and let the chamber know! Next year the event will be held at the same time as the nightly rodeo–and should be tremendously fun. We can’t wait! Hope to see you all there!

We love this BlogSpot. It examines reading and writing, and just good ole storytelling. You might want to check it out! http://themirroredpen.blogspot.com/2013/12/december-12-2013.html