New edition of IT WAKES IN ME! 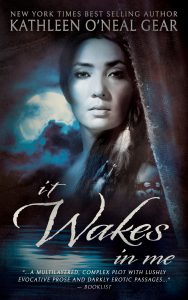 “The historical detail and vivid descriptions make this a fascinating and compelling read.” –Romantic Times BookReviews

I’m excited to see the FIRST HARDCOVER ever of my book, IT WAKES IN ME, which will be released on September 6th. The new cover is stunning and really captures the dangerous, seductive element of the leading character’s personality.

I wrote the book because, as an anthropologist, the global dimensions of serial murder fascinate me. We can trace the phenomenon across continents and through time from Australia to England, Pakistan to Mexico, across Africa, Asia, and America. It’s an aberration in human behavior, but a profoundly pervasive one that transcends cultural boundaries. I have long pondered how ancient peoples in North America would have handled a serial murderer silently hunting victims through their small villages.

The question interests me because many native peoples believed that mental illness was soul-loss. The soul had fled the body because of unfulfilled desires. The job of the healer was to discover, and then fulfill those desires so that the soul would wish to return and the sick person would be healed. Recollect missionary, Father Gabriel Sagard, wrote in 1632, “…for they prefer to suffer and be in want of anything rather than to fail a sick person at need.”

The soul-curing ritual used in IT WAKES IN ME was real. At the time of European contact in the 16th century, the andacwander had spread from Iroquoian to Algonquian tribes, indicting the remarkable healing power it possessed.

When High Chieftess Sora is kidnapped, drugged, and transported to the greatest healer in the land, his first words to her are: “They tell me you are a murderer. Is it true?”

I hope you enjoy this journey to America’s spectacular past!