MAZE MASTER is getting some nice advance praise…

“MAZE MASTER is a masterpiece of a bio-thriller that seamlessly melds science and superstition into a      tale as relentless as it is riveting. Kathleen Gear has lent credence and credibility to the end-of-the-world tale championed by the likes of WORLD WAR Z, I AM LEGEND, and Stephen King’s THE STAND. This is speculative storytelling at its level best, weaving cutting edge genetics into a puzzle that must be solved if mankind is to survive. A master of the historical novel, Gear proves herself equally adept at handling the future in this cure for the common thriller.”

“From the very first page, you’ll know you’re in the hands of a master storyteller. With plenty of “Da Vinci Code” twists and turns, MAZE MASTER is both thrilling and mind-bending.” Tess Gerritsen, New York Times bestselling author of I KNOW A SECRET.

Happy Monday to All!

Only 10 Days to Release!

Only ten days left to the publication of OUTPOST, Mike’s frontier science fiction novel. BOOKLIST says, “Gear kicks off a new sf series by weaving a number of compelling characters into the narrative, including bold heroine Talina Perez and Donovan itself, a planet teeming with danger and delights in turn. The mix of stolen identities, rapacious greed, and treacherous landscape propels the reader forward, hurtling toward the possibility that nobody is destined to escape Donovan alive.”

Can’t wait to hold the actual book in our hands!

We are delighted by the advance reviews for Mike’s upcoming science fiction novel, OUTPOST! Here are just a few…

“What a ride! Excitement, adventure, and intrigue, all told in W. Michael Gear’s vivid, compulsively readable prose. A terrific new science-fiction series; Gear hits a home run right out of the park and all the way to Capella.” —Robert J. Sawyer, Hugo Award-winning author of Quantum Night

“A marginal colony on a living world—where human life and human will are tested to the limits. An intriguing and inventive new work from Michael Gear, first of a trilogy. Recommended!”–C. J. Cherryh, Hugo Award-winning author of Downbelow Station

While W. Michael Gear’s new novel Outpost is mainly sci-fi, there are enough monstrous creatures and terrifying moments in it that fans of Alien and the like should enjoy it, which is why we’re advising you to mark your calendars for February 20, 2018. That’s the book’s release date via publisher DAW (a Penguin Random House imprint).

A thrilling tale of high stakes survival on an alien planet, Outpost is the first installment in Gear’s new The Donovan series. The second book, Abandoned, is scheduled to arrive in November 2018, so if you like the first one, you won’t have to wait too long for a sequel.

On the distant planet Donovan, the realities of colonization meet the cold, hard demands of corporate overlords. In the years since Donovan was settled, many original colonists have died and several supply ships have completely vanished, leaving the planet nearly feral. Corporation Supervisor Kalico arrives to discover disarray, and demands answers from community leaders. Competing interests from Corporation employees create tension, as Donovan’s loose organization offers opportunity for deception and deceit. However, Kalico must first deal with one of the missing ships that reappears bearing horrific cargo and a seemingly impossible paradox. Gear (Moon Hunt, 2017, with Kathleen O’Neal Gear) kicks off a new sf series by weaving a number of compelling characters into the narrative, including bold heroine Talina Perez and Donovan itself, a planet teeming with danger and delights in turn. The mix of stolen identities, rapacious greed, and treacherous landscape propels the reader forward, hurtling toward the possibility that nobody is destined to escape Donovan alive. Fans of epic space opera, like Rachel Bach’s Fortune’s Pawn (2013), will happily lose themselves in Donovan’s orbit.

The BEST Science Fiction Books of 2018!

Thanks to BookBub for including Mike’s upcoming science fiction novel, OUTPOST, in its list of The Best Science Fiction Books of 2018! COMING February 20th! https://media.bookbub.com/blog/2018/01/02/preview-best-science-fiction-books-2018/

Thanks to BookBub for including Mike’s upcoming science fiction novel, OUTPOST, in its list of The Best Science Fiction Books of 2018! COMING February 20th! 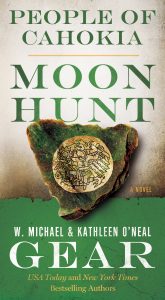 We just received a lovely review for MOON HUNT in the Providence Journal:

“Few authors have ever been able to lay claim to a genre. But Kathleen and Michael Gear have taken historical fiction and made it all their own, as clearly displayed in “Moon Hunt” (Forge, 416 pages, $26.99), the third in their Native American Morning Star series.

All the staples of the Gears’ brilliant, richly drawn tapestries are firmly on display here, once again… The Gears have reconstructed Moon Hunt’s ancient world with such vivid tones and expertly crafted detail that it magically comes to life in the tradition of James Michener. But they’re much better storytellers and the result is a tale certain to generate broad appeal, whether you’re a history buff or not.”

Thanks! It’s always a relief to get a great review!

Hope everyone is having warm and wonderful holidays! 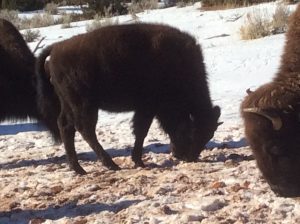 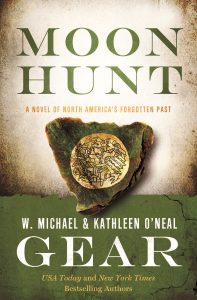