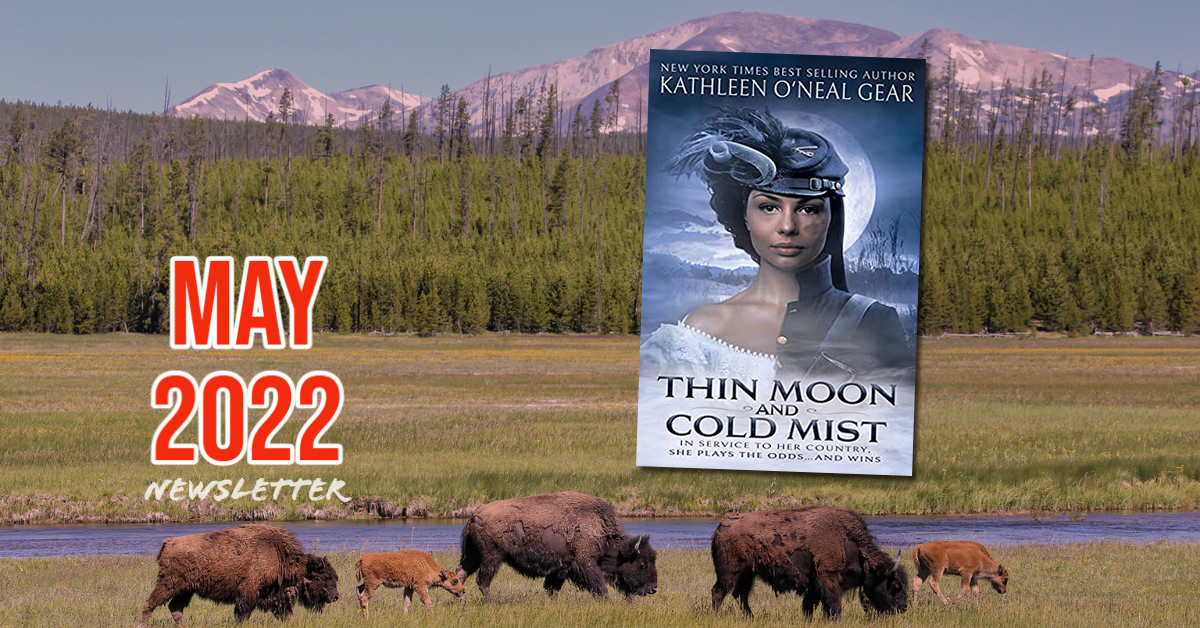 Like most of the West, we are in a severe drought, but it’s raining today. We can almost hear the trees and grass sighing in relief. Buffalo calves are being born, and their mother’s desperately need the high nutrition in spring grasses to feed those hungry newborns.

It’s been an exciting month for us.

Kathleen’s book, THIN MOON AND COLD MIST, about a female spy during the civil war who is hunted by a Union officer for her “war crimes” was just re-released by Wolfpack Publishing with a great new cover and has been the #1 bestseller in Civil War History on Amazon for several days now. It’s currently on sale for $0.99 cents, so if you’ve never read this civil war classic it’s a great time to do it. It’s been getting fantastic reviews.

Also, Book 2 in the Rewilding Reports, THE ICE GHOST, comes out on May 17th!  Publishers Weekly says, “Gear continues her inventive postapocalyptic trilogy featuring revived ancient hominds, with this jam-packed sequel to THE ICE LION.  …deep inside the massive mountain caves, perplexing relics and strange truths await…tense adventure will keep readers hooked.  Fans will eagerly await answers in the series conclusion.”  Book 3, THE ICE ORPHAN, comes out in November, 2022. 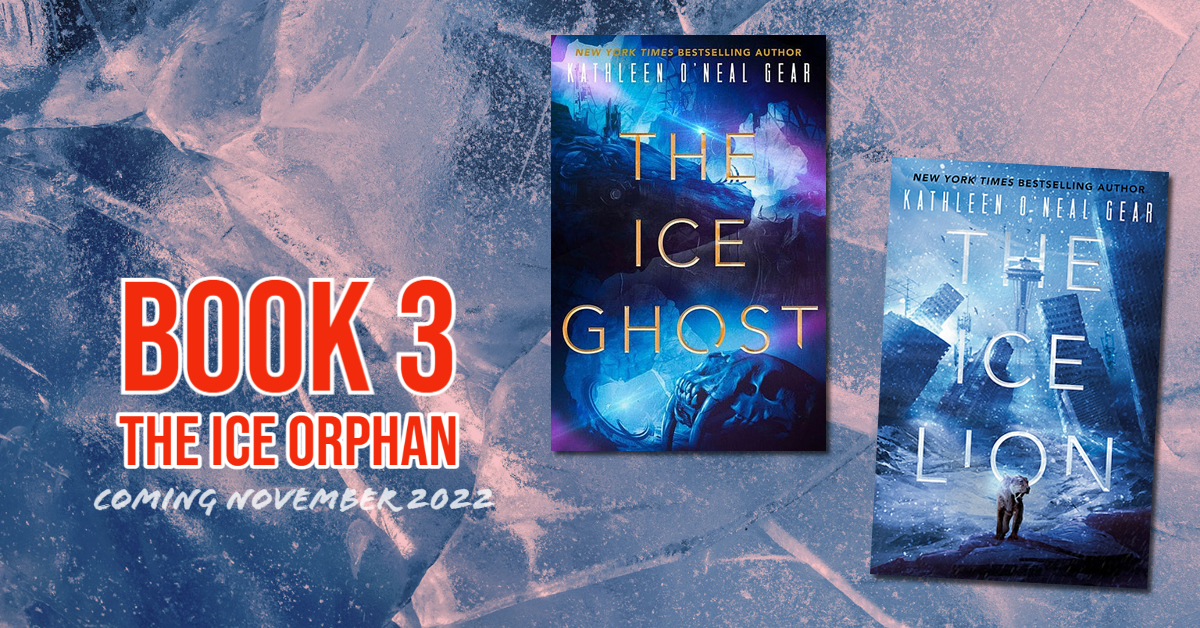 This was an interesting trilogy to write. It allowed us to explore differing concepts of the origins of consciousness, particularly quantum consciousness.

This debate actually began in the 17th century, when two giant figures in physics history disagreed about the nature of light. Was it a particle or a wave? Isaac Newton said light was “corpuscular,” meaning it behaved the same way that particles did. But Christiaan Huygens said that light was a wave, noting that it possessed wave-like features like interference and diffraction. Four hundred years later, it turns out that both are true. Physicists can measure each. Pass a beam of light through two slits and it acts like wave. Pass that same beam of light into a conducting metal plate and it behaves like a particle, confirming the very weird nature of reality.  Perhaps the strangest idea of all is that given the right circumstances, an entire human being can behave like a quantum wave. What does that mean and why does it have implications for the origins of consciousness?

In an interview with the Huffington Post, the great mathematical physicist, Sir Roger Penrose, along with Dr. Stuart Hameroff, director of the Center for Consciousness Studies at the University of Arizona, speculated on this new quantum theory of consciousness which they called “orchestrated objective reduction,” or Orch OR for short. They said, “The connection to space-time geometry also raises the intriguing possibility that Orch OR allows consciousness apart from the brain and body, distributed and entangled in space-time geometry. It’s possible that the quantum information can exist outside the body, perhaps indefinitely…” What does that really mean? Are these physicists saying a soul exists? Well, that very much depends on how you define “soul.”

Scientists at the Max Planck Institute for Physics in Munich agree: “The beyond is an infinite reality that is much bigger…which this world is rooted in. In this way, our lives in this plane of existence are encompassed, surrounded, by the afterworld already… The body dies but the spiritual quantum field continues. In this way, I am immortal.”

This may sound like a crackpot theory, but Penrose and his team found evidence that “protein-based microtubules—a structural component of human cells—carry quantum information—information stored a sub-atomic level.”  Physicist Lee Smolin wrote that Penrose was “One of the very few people I’ve met in my life who, without reservation, I call a genius. We’d be foolish to dismiss their theory out of hand.”

For more information, you might want to look up the article, “Quantum Death—‘Human Cells Carry Quantum Information that Exists as a Soul,” in the March 14, 2020 edition of The Daily Galaxy.

The questions asked by Penrose are at the heart of THE ICE GHOST and THE ICE ORPHAN.

What is Quancee? Is she conscious? Does her consciousness survive after she ceases to function? Does ours?

As summer begins, we hope you are enjoying the sunshine and warmth. Happy reading to all!

You can get THE ICE GHOST at your local bookstore or: