Getting Lost on the Sacred Journey - Newsletter Fall 2017 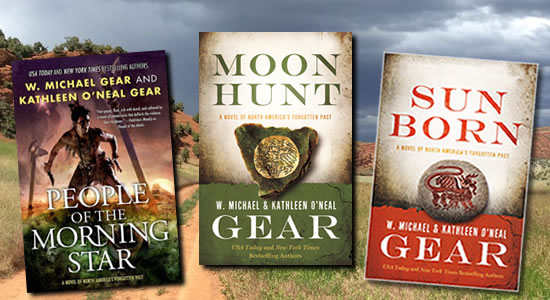 As fall brings cooler days to Red Canyon Ranch, we’re seeing more elk on the high slopes. Four days of rain have restarted the grass, and if we have a warm enough Indian summer, the bison calves will grow fat and sleek.

Our biggest challenge is finding a logger who will bring us a semi-load of firewood logs. A load like that will provide us with enough wood to heat the house for the next five years.

And, speaking of challenges, in the coming year we’re going to see six novels released by five different publishers.

In October, Gallery releases COMING OF THE STORM in trade paperback.

On November 21, the third Morning Star book, MOON HUNT comes out in hardback and e-format.

January 19, 2018 is the date Michael’s FLIGHT OF THE HAWK: THE RIVER comes out in hardback and e-format from Five Star Press.

February 9, 2018, Michael’s science fiction OUTPOST will be released in hardback and e-format from DAW Books.

Then, on April 21, 2018, Michael’s THIS SCORCHED EARTH will be published in hardback and e-format from Forge Books.

Tentatively scheduled for July, 2018, we will see Kathleen’s thriller, MAZE MASTER, released in hardback and e-format from St. Martin’s Press.

All of the above titles are available from preorder from Amazon, Barnes & Noble, BAM, or your favorite local bookstore.

So, here’s the challenge: All of you people who keep telling us to write faster? Okay, we did! Now, can you keep up?

As we stated, our next Morning Star book about Cahokia is MOON HUNT. We thought we’d tell you a little about how we use Native American mythology to set the stage for our characters action.

Anthropologists have a fascination with myth that traces its origin back to the late nineteenth century. Then in 1949 Joseph Campbell published his classic The Hero With A Thousand Faces, in which he codified the origins and framework for the classic hero’s tale in Western literature. Film producer George Lucas popularized Campbell’s work when he acknowledged that he’d relied heavily on Hero With a Thousand Faces in the writing of Star Wars. This wasn’t the first time the study of mythology provided the roots for a modern classic. J.R.R. Tolkien relied on ancient Norse religion—sprinkled with some Celtic overtones—as the basis for his Ring trilogy.

We envy Lucas, Tolkien, and the authors of modern fantasy, all of whom draw upon the trove of Western myths and tropes. Whether it be from the Icelandic Sagas, Beowulf, Homer, or the Bible, they have a written body of lore from which to draw. Thus we all know that special powers can be imparted to blades, to be careful of what you wish for amongst the standing stones, and that one must beware when a serpent offers you an apple while you’re lounging in the garden. You can always trace the origins of the story to its roots. In the case of Gilgamesh, you can even go back to the original cuneiform.

In our Morning Star series the interpretation of the myth gets a little more dicey. The books are set in ancient Cahokia, a place for which we have no written records. The thousand-year-old metroplex straddled the Mississippi River where St. Louis stands. At its height, Cahokia was larger than contemporary London, Paris, and Rome combined. It also had a much higher standard of living. The houses were warmer, the food was better, and people didn’t empty their chamber pots into the streets for their neighbors to wade through.

European cultural traditions go back to the Middle East, Sumer, Egypt, and Greece; in North America the cradle of civilization lies in the lower Mississippi Valley where people began building earthen pyramids 6,000 years ago. The culture spread up the rivers, eventually creating the Poverty Point culture 3.500 years ago, the Hopewellian interaction @ 2000ya, and finally what we call the Mississippian culture which reached its fluorescence at the great city of Cahokia. Think of Cahokia’s influence on North America as you think of Rome’s impact on Europe. For three hundred years, it was the big dog, and after it fell, the kingdoms that followed existed as its cultural heirs until the arrival of de Soto in 1539.

Because Cahokians built with wood and thatch in a wet and acidic woodland, it’s tough to piece together their physical culture. Except for a few freak examples of preservation, we don’t have their remarkable fabrics, exquisite wooden furniture, carvings, monumental statuary, or paintings. But the most vulnerable part of their culture is the one we’re interested in: the mythology.

How can we write the story of a vanished people without their myths, legends, and tales?

It’s an incredible challenge, an intricate, puzzling, mystery. And the miracle is that through dedicated scholarship, we can recreate the bare bones. Starting in the 1800s ethnographers scrambled to record Native American stories before they vanished. Hidden away in the musty old Bureau of American Ethnography volumes are recorded tales of the Chickasaw, Creek, Yuchi, Shawnee, Osage, and so many others.

The stories and myths differ across the various cultures and regions of eastern North America. But through painstaking comparison, there are similarities that hint of antiquity. For example, the story of the hero twins is universal.

The next clues come from archaeology—the actual excavation of artifacts. Sometimes we get entire statues, or maybe it is only a shell carving, or a copper relief that depicts a mythological figure. Additionally, we have pictographs preserved in caves: images we can tie back to the stories. Date the artifact or drawing, and we can date the age of the story.

So, what have we been able to reconstruct? First, the Cahokians had a three-tiered universe of Sky World, Middle World, and Underworld. The sky was inhabited by remarkable creatures like the two-headed eagle Hunga Auito. Then came the Thunderers, who cast lightning bolts at their nemeses in the Underworld. Four great ivory-billed woodpeckers stood at each of the cardinal directions and powered the winds with their wings. The sun and moon were Powers in their own right, and their movements across the sky—along with the constellations—underlay the entire society.

The Middle World was the surface of the earth with its own Powers, typified by animals and plants, as well as “little People”, witches, and magical beings like Stone Man. Plants were particularly important. Think not only food, but medicinal and spiritual—like sacred datura that plays such an important role in the books.

The Underworld had its own magical creatures like the Underwater Panther, Horned Serpent, Snapping Turtle, and the Tie Snakes who lived under rivers and in deep springs.

It was considered calamitous to mix the Powers from the different worlds—and not only the priesthood, but special societies with secret initiations studied and dedicated themselves to the understanding and propitiation of the different spiritual forces.

This is the heart of the third Morning Star book, Moon Hunt. From both the historical stories of the Muskogean peoples and the images in art recovered from archaeological sites in Georgia and Alabama, we know that the sphinx moth was special. Not only was it a creature of darkness, but it subsisted on Powerful spirit plants like datura, tobacco, and nightshade. An iconic image depicts Morning Star in battle with a sphinx moth. In his right hand, he holds the moth by its proboscis, in his left is a sacrificial knife. (See the Moon Hunt cover.)

As Moon Hunt opens, a disgraced young noble woman, Whispering Dawn, is being transported to Cahokia against her will. Her father is sending her to wed the Morning Star. Not only is she married to a rebel people’s young lord, but she’s an initiate of the Sacred Moth society. No sooner is she promised to Morning Star, than she is coerced into assassinating him. Infusing his drink with datura nectar, she unwittingly sends his soul to the Underworld.

Remember when we said mixing Powers was very bad? Morning Star is a Sky World being. So, when Sacred Moth carries his soul to the Underworld, all chaos is unleashed on the Cahokian world.

In the Morning Star novels we delight in bringing back colorful and enchanting creatures like Piasa, Horned Serpent, Sacred Moth, the Morning Star himself, and the rich and wonderful creatures that made up the Cahokian world. As you read Moon Hunt, we hope you find this lost America as fascinating as we do.