Coming of the Storm: Book One of Contact: The Battle for America 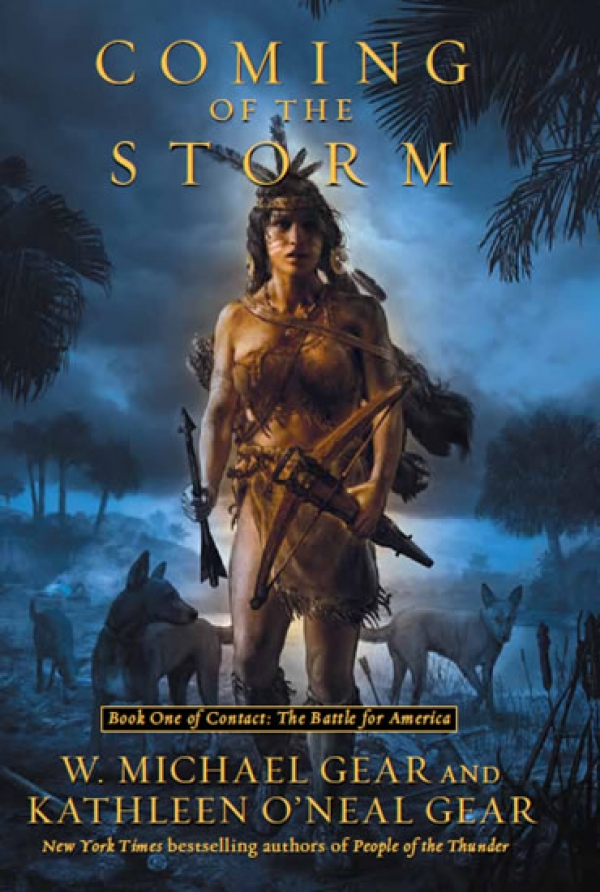 The first book in an exciting new series about Native American and European first contact by Kathleen O'Neal and W. Michael Gear.

From New York Times bestselling novelists W. Michael and Kathleen O'Neal Gear comes a landmark new series portraying the devastating clash of cultures that followed the European invasion of the early America. Dramatic, authentic, and deeply moving, this first book in the Contact series tells the story of the blood-drenched years that followed Spanish explorer Hernando De Soto's landing in "La Florida" in 1539- as seen entirely through the eyes of two courageous Native American.

Black Shell, an exiled Chicksaw trader, is fascinated by the pale, bearded newcomers who call themselves "Kristianos," and not even the wise counsel of Pearl Hand, the extraordinary and beautiful women who has consented to be his mate, can dissuade him. It will unfortunately take a first-hand lesson in the Kristianos' unfathomable brutality for Black Shell to fully comprehend the dangers that these invaders pose to his people's way of life.

While his first instinct is to run away with Pearl Hand, somewhere the Kristianos cannot find them, Black Shell has been called to a greater destiny by the Spirit Being known as Horned Serpent. With Pearl Hand by his side, Black Shell must find a way to unite the disparate tribes and settlements of his native land and overcome the merciless armies of de Soto, Which will stop at nothing attain wealth and power.

For years readers have urged the Gears to bring the class of Native American and European cultures to life as only they can. Now, with Coming of the Storm, the Gears unleash their expansive breadth of knowledge and stunning writing talents to dispel the myths and falsehoods surrounding Hernando de Soto, as they paint a vivid portrait of the heroic men and women who fought a terrifying, military super power for their survival - and in so doing defined the character of a nation.