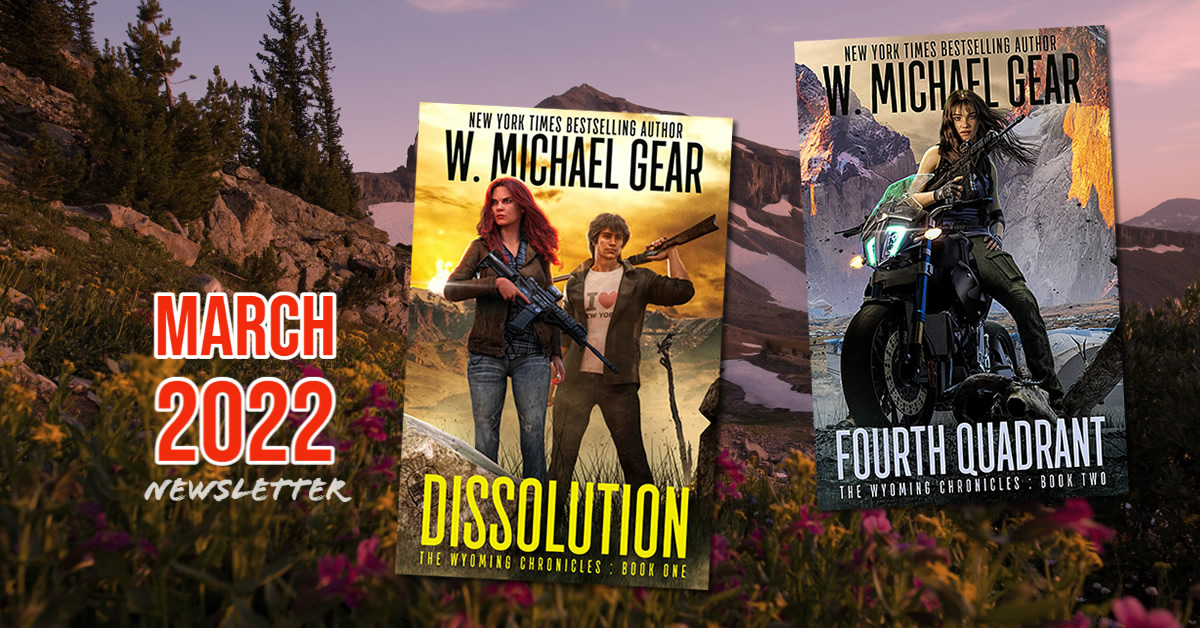 HAPPY SPRING!  Wyoming is finally coming out of the deep freeze.

It’s such a pleasure to see green grass sprouting and aspens blooming.  We are so looking forward to getting outside into the sunshine again.   We’re sure our vitamin D needs a boost.

Speaking of sunshine, we just returned from the Tucson Festival of Books—which is a great book event.

We spent two days at the Wolfpack Publishing booth.  Not only was the sunshine a treat, it was a joy to meet new friends and see old friends again.  And we had a chance to get to know our new publisher better.  Wolfpack is filled with really terrific people.

Book Festivals always makes us want to come home and write, which is what we’ve been doing!   Michael just turned in the final manuscript for the next Donovan book, RECKONING, coming out in October of 2022.  The southern continent of Donovan, it turns out, is just as interesting and lethal as the rest of the planet.  The new alien species are marvelous, and the growing relationship between Kylie and the quetzal named Flute is charming—or so Kathleen says.

Kathleen just finished a short story for an anthology being published by Wolfpack later this year. Entitled “No Quarter,” the story explores the 1836 battle of the Alamo from the perspective of the slaves inside the fortress.

Specifically, the story focuses on the experiences of Bettie and Charlie, who apparently belonged to Jim Bowie.  Bowie was a well-known slave smuggler and land speculator.

Just a little background here…  Most historians ignore or belittle Bettie’s story, though early Texas historian John Salmon Ford believed her. Keep in mind, the Black women inside the Alamo are almost completely left out of the story--though we know the only woman to die at the Alamo was a Black woman.  Probably named Sarah, her body was found between two cannons.   Bettie was apparently a cook for the garrison.  She claimed she and Charlie were hiding in the kitchen when the Mexican army overran the Alamo.

All of the main figures in the Alamo--Bowie, Crockett, Travis, and others--brought slaves with them into the Alamo, but we only know them by first names.  Why? Because when slaves were brought to America, their African names were immediately taken away. When we look at the most commonly used lists of slaves that survived the Alamo, we find only, “Bettie, Charlie, Joe, and Sam.”  No last names.  There were likely many more Black servants and slaves in the fortress. 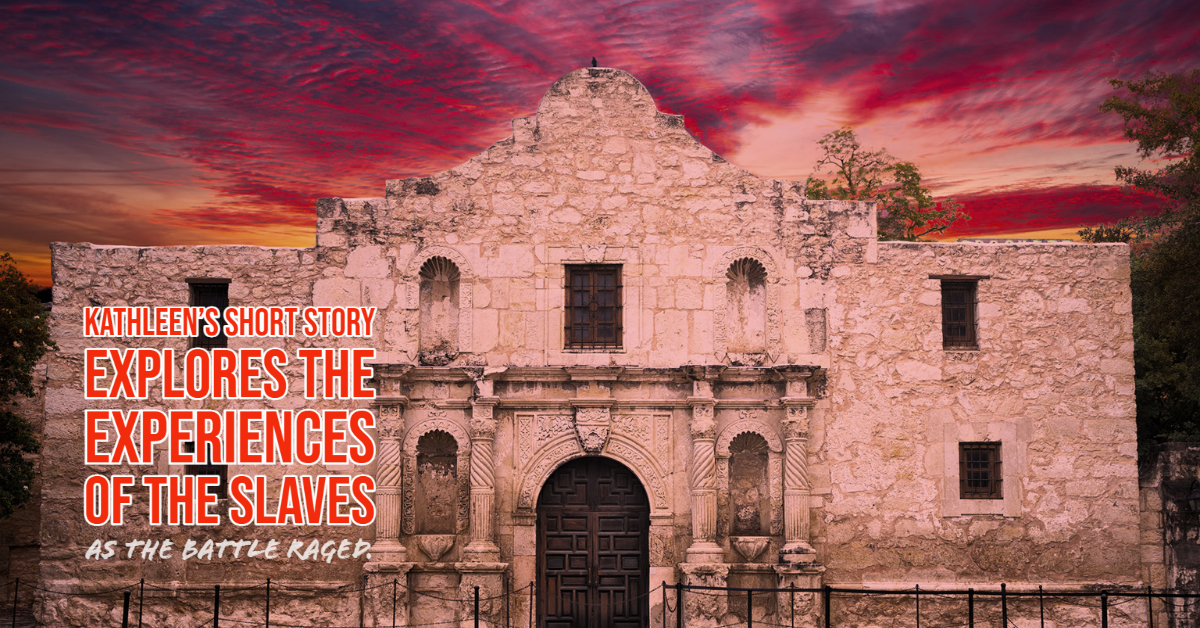 Kathleen’s short story explores the experiences of the slaves as the battle raged.

Mexico abolished slavery in 1829 when Texas was still part of Mexico, and a little-known underground railroad developed that helped around 10,000 slaves escape south to Monterrey, Mexico.  Because slavery was illegal, General Santa Anna freed all the surviving slaves after the battle.  However, slavery would be immediately re-established in 1836 when the Republic of Texas was formed.  Texas entered the union in 1845 as a slave state.

Examining the slaves’ stories provides a very different perspective on the battle of the Alamo.  At least some of them knew that if Santa Anna won they would be free, and if Texians won, they would not.  In fact, the freed Blacks had reason to worry, as well.  Don Carlos Barret--of the committee on state and judiciary at the Council Hall in San Felipe--submitted a proposal barring free blacks from immigrating to Texas. In addition, for any free Negro already in Texas, Barret wanted it made “lawful for any citizen of Texas to apprehend said Negro or mulatto and take him or her before a judge or alcalde of the municipality,” where he or she would be sold at public auction.  One-third of the proceeds would go to the person who apprehended the freedman or freedwoman.  The remainder would go to the state treasury.

Bettie wisely fled to Monterrey.  That’s when we lose sight of her in the historical record.

Much of history is told from only one perspective, and history is poorer because of it.

Readers must be able to see the entire story, the story told from each perspective, before they can truly understand historical events.  Kathleen hopes you enjoy will enjoy Bettie’s story in “No Quarter.”

For those who’ve asked, the links to our latest and upcoming books are below.

And don’t forget that DISSOLUTION and FOURTH QUADRANT are still on the bestseller lists!  Which is a wonderful surprise for us.  Thanks to everyone who has read and reviewed the books.  It matters.  We appreciate it.

THE ICE GHOST, Book Two in the “Re-wilding Reports” by Kathleen O’Neal Gear

PEOPLE OF CAHOKIA: LIGHTNING SHELL, BOOK 5 in the “People of Cahokia” series, by W. Michael Gear and Kathleen O’Neal Gear

We are delighted that these books are finally available in e-book and trade paperback!

SAND IN THE WIND, by Kathleen O’Neal Gear