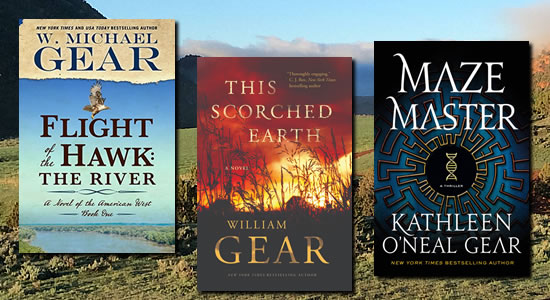 For all those of you who constantly urge us to “Write faster!” we think we’ve got enough new books out to keep you satisfied. Now, let’s see if you can keep up!

Since the release of MOON HUNT in November, it’s been a hectic first quarter of 2018. Call it too much of a good thing. An author always wants to keep his name out there. In the past we’ve had as many as three books come out in a year, but starting with MOON HUNT we’re seeing six books released from five different publishers in a twelve-month period.

In November, the third book in the Morning Star series was published. MOON HUNT picks up the stories of our most beloved rapscallion Seven Skull Shield, Clan Keeper Blue Heron, and the unrequited lovers: Fire Cat and Night Shadow Star. Based on Southeastern Native lore and iconography, it’s the story of how, through a botched assassination attempt, Morning Star lost his soul to a humming moth and ended up trapped in the Underworld.

Then, in January, Michael’s FLIGHT OF THE HAWK: THE RIVER was published by Five Star Press in both hardback and e-format, with the large print edition coming in April. This is the first in a Fur-Trade-era trilogy that predates THE MORNING RIVER and COYOTE SUMMER. It begins the story of John Tylor: complicit in the Burr conspiracy he seeks to flee up the Missouri River with Manuel Lisa’s 1812 trading expedition. As of this writing, the novel has received solid 5 Star reviews and passionate demands for the sequel. Michael is contracted for the second book, FLIGHT OF THE HAWK: THE PLAINS. Scheduled for publication in hardback and e-format in June, 2019.

February saw the publication of Michael’s OUTPOST in hardback and e-format. The novel marks Michael’s return to science fiction after a twenty-five year hiatus and begins a series set on a frontier world called Donovan. Some call OUTPOST a cross between Deadwood and Avatar. The series introduces Talina Perez, a hardy new heroine, not to mention Donovan’s wildlife, which is not only dangerous, but has an agenda all its own. The second book in the series, ABANDONED will be published November 20. The third book, PARIAH has been delivered and is scheduled for publication in 2019. That’s not all. The proposal for book four is on the publisher’s desk. Michael is just having too much fun with this to stop.

And now, the big book:

THIS SCORCHED EARTH opens with “Beginnings often hark back to a single, crystalline moment, as if it were a precursor for everything that happened...” That moment for Michael was at the Shiloh battlefield as peach blossoms fell around him on the anniversary of the battle.

Though it is published under the name William Gear (yes, that’s what the W. stands for), if Michael is remembered for any great accomplishment—outside of marrying unusually well—it will be for this novel. A labor of love for more than thirty years, it has finally been published as the big spring title by Forge Books in both hardcover, e-format, and audio. Really great audio, by the way. Large print will be coming later.

THIS SCORCHED EARTH is currently on bookshelves everywhere. Author LJ Martin calls it, “The Lonesome Dove of our decade… Even more entertaining than Gods and Generals: which is a feat I would not have thought possible.” Heather Graham calls it, “A hold-tight keeper.” Longmire author Craig Johnson says, “…Compelling characters…a passionate sense of humanity…” We don’t have room for all quotes from award-winning and bestselling authors and historians, but the words stunning, remarkable, powerful, and epic seem to be found in most of them.

We can already hear the question: Why is the author for THIS SCORCHED EARTH William Gear instead of W. Michael Gear? Answer: The publisher considers the book so special that they wanted to set it apart from our other work. How out of the mold? The good folks at Forge are entering THIS SCORCHED EARTH for both the Pulitzer Prize in fiction as well as the National Book Award. They think it’s that special.

We hope that you all take the time to share this landmark work. Then, if you wouldn’t mind, send us your thoughts with us at Kathleen O’Neal Gear and W. Michael Gear at Facebook.

And where has Kathleen been all this time? Working on her own most remarkable and challenging novel, MAZE MASTER, which will be published in hardback and e-format this July. She already has outstanding quotes from Lee Child, Steve Berry, Tess Gerritsen, F. Paul Wilson, C.J. Box, and a slew of other No. 1 New York Times bestselling authors.

MAZE MASTER is a near-future genetic thriller that draws on the latest research in Neandertal DNA and particularly the HERV-K virus. Literally the “Loch Ness” monster of the human genome. MAZE MASTER is available for preorder now from your favorite bookseller.

Meanwhile, back at the ranch, we’ve survived most of the winter—and this one’s been like an old-time Wyoming winter. Cold. Snowing off and on the entire time. But the bison have come through remarkably fat and sassy. Just last month we delivered a load of calves to Cold Creek Bison. In the process, neither one of us was run over, trampled, horned, or hammered. But, truth to tell, we’re not as fast as we used to be, and we’re not as quick climbing the gates when a cow gets feisty.

What’s coming down the pike? We’re working on STAR PATH, the fourth Morning Star book. Expect STAR PATH to be published in spring of 2019. Then, next year, we return to the PEOPLE series with PEOPLE OF THE CANYONS—a novel about the Fremont culture in Utah, Colorado, and Nevada. DAW will be releasing Michael’s ALPHA ENIGMA, a multiverse archaeological thriller in 2019. Kathleen is finishing up her screenplay for MAZE MASTER, and has several novels in development. Stay tuned!

Hope to have another update for you this summer. In the meantime, Michael and Kathleen, along with our shelties, Jake, and Shannon—not to mention the bison and wild turkeys—wish you well from Red Canyon Ranch!