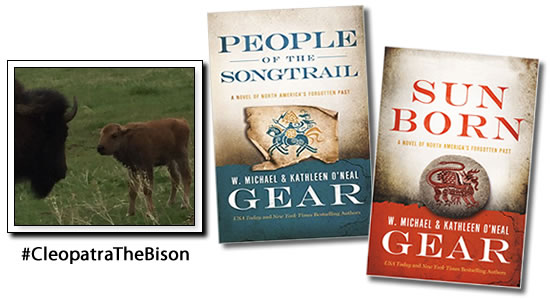 We’re nearing the end of April here at Red Canyon Ranch, and along with warmer weather, we’re getting deeply appreciated moisture. Green grass and wildflowers are appearing everywhere, which is lovely for the newborn bison calves. For those of you who are on Twitter, you can follow the life history of this year’s first calf at #CleopatraTheBison, or by visiting @GearBooks every Saturday. Cleopatra is currently a beautiful little dynamo, racing around the meadow like the wind. It’s such a joy to watch the new calves discover rain and wind, and try to play with the numerous field mice that leap through the grass. Their curiosity reminds us that the world is filled with daily miracles.

In addition to our writing schedule, we’ve been painting, grading the road, and doing ranch repairs, as time permits. Our ranch agent, Shirley Lehman, at Western Real Estate in Cody, says to expect a string of potential buyers, so it’s a constant battle to keep the house and property ready for a showing. (Normal people don’t think of these things, but writers are always messy when they’re being productive. Who wants to scrub a toilet when the bad guy is about to stick a hot poker into your hero’s navel?)

The big news this spring is that Kathleen has sold a near-future thriller to Thomas Dunne books. The working title is MAZE MASTER and it should be on the shelves in spring of 2017. The story is straight out of the current science headlines: an ancient retrovirus from Denisovans, which was inherited by modern humans around 50,000 years ago, suddenly becomes active in the human genome. To cure the plague, Kathleen’s characters must unravel the global maze left by the mysterious Maze Master in his search for the legendary Marham-i-Isa, the ointment supposedly used by Jesus to heal the sick and raise the dead. We’ll keep you posted as the book goes through the publishing process.

Other news is that PEOPLE OF THE SONGTRAIL will be released in paperback at the end of September! And SUN BORN, the second book in the Morning Star trilogy, will be released in hardback and e-formats in October of 2016. In SUN BORN, a Mayan noble from distant Chichen Itza travels to Cahokia to investigate stories of a reincarnated god. To Night Shadow Star’s horror, she is married to the abusive foreigner. Blue Heron is marked for destruction by a long-divorced husband, and Fire Cat must play the chunkey game of his life!

While you are checking out the PEOPLE OF THE SONGTRAIL paperback and SUN BORN, take a look at the new cover treatment for the “People” books. Tor/Forge is completely repackaging all the People books for reissue this fall. We really like the new concept.

At the first of the year Michael delivered his Civil War/Western Historical novel, TOUCH OF SANITY, to Tor/Forge. (Marketing and sales will probably change the title.) He’s been working on this one for thirty years. His editor read it and replied with a capitalized WOW! Kathleen calls this his “Pulitzer” novel. The initial quotes have begun to come in comparing TOUCH OF SANITY with LONESOME DOVE and GODS AND GENERALS. Fans of MORNING RIVER, COYOTE SUMMER, and LONG RIDE HOME: You should really enjoy this one! Publication is scheduled for September of 2017.

Additionally, we are working on the third Morning Star book titled MORNING STAR: MOON HUNT. As this is written, we’ve made it to page 433 in the manuscript and expect to deliver it by the end of May. To whet your appetites, the Morning Star’s spirit is locked in the Underworld and Night Shadow Star must physically journey down through a magical cave to bring the living god’s spirit back to his body. Meanwhile, Blue Heron has been dismissed as Clan Keeper and finds herself a captive. To save it all, Seven Skull Shield and his dog Farts must go head-to-head against a man who was once his best friend in the world. But only one of them will survive.

Here at the ranch, we’re vaccinating bison calves and preparing for PEOPLE OF THE EARTH DAYS the last weekend in June. This year we have new tours, speakers, and events. For the book signing on Sunday we are hosting special New York Times bestselling guest authors, Lucia St. Clair Robson, Kat Martin, and L.J. Martin, and award-winning author, Dr. Steve Horn. Contact thermopolischamber.org for more information or like the PEOPLE OF THE EARTH DAYS page on Facebook!

After that we’re headed to New York City for ThrillerFest XI and publisher meetings. Michael will be on a panel about historical thrillers at 1:00 pm on Saturday July 9th, with a book signing to follow. Google ThrillerFest for more information.

We hope that this edition of the newsletter finds you all well, happy, prosperous, and most of all, content. Peace and health until the next time!

For those who’ve asked, here are some links for the books that will be released this year. Or you can ask for information at your local bookstore:

PEOPLE OF THE SONGTRAIL (September, 2016)