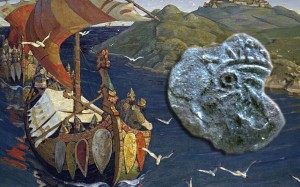 This is another one of those fascinating archaeological mysteries.  This Norse penny dates to the reign of King Olaf III, between AD 1065-1080.  But it was found in an Native American archaeological site, the Goddard site in Maine, that dates to between AD 1180-1235.  How did the Norse penny get there?  Ah…that’s a good question!