Tambora eruption 200 years ago in Indonesia affected the world.

The climate change caused by the Tambora eruption 200 years ago had effects that we still experience today.  Ever read the novel Frankenstein?  Mary Shelley was watching the world die around her when she wrote that classic book.  It all started on April 10, 1815 when a volcano in Indonesia, called Tambora, erupted and spewed 36 cubic miles of ash and rock into the air.  The debris blocked sunlight for two years.  Called the “year without summer,” it snowed in June in New England in 1816.  The cold summer caused worldwide crop failures, followed by global famines.  The death toll from Tambora would eventually rise to more 100,000 lives. 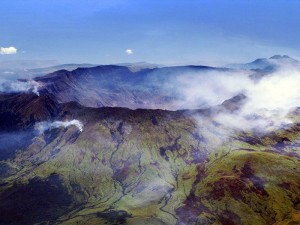