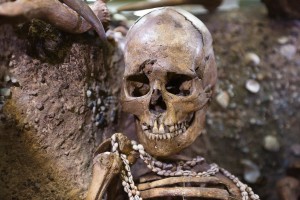 This is one of the “Ladies of Teviec.”  She was found in a Mesolithic cemetery off the coast of Brittany, France.  Her remains date to around 8,500 years ago. She was approximately 25 years old.  She died when someone clubbed her in the head five times, cracking her skull, and she was shot between the eyes with an arrow.  Her loved ones must have found her body, because she was buried with care in a pit roofed with red deer antlers.

We all like to believe that some time in the distant past there was a Golden Age of peace and prosperity where people lived in harmony, but the truth is, while there were harmonious episodes in human prehistory, they were relatively short and punctuated by extreme violence.  In the case of the Ladies of Teviec, the climate was changing, shifting from the Pleistocene Ice Age and into this warm period we enjoy now, the Holocene.  Sea level was rising.  The “ladies”” homeland, which archaeologists call Doggerland, was being swallowed by the ocean.  Apparently, war erupted as people scrambled for disappearing land.  Eventually there would be no dry land left in Doggerland for anyone.