Fire in the Sky: Book Two of Contact: The Battle for America 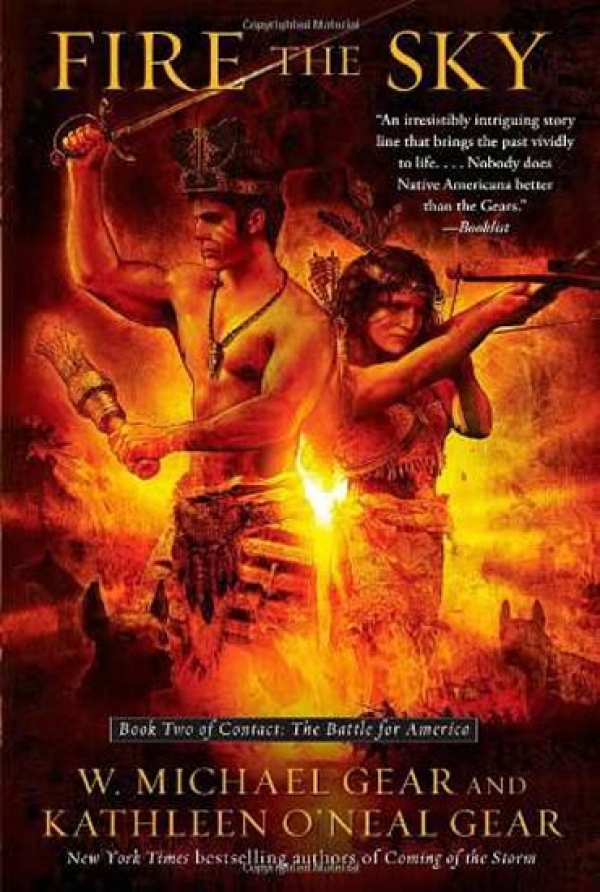 New York Times bestselling novelists W. Michael and Kathleen O'Neal Gear have long been considered the foremost chroniclers of early Native American life. Now, in a critically acclaimed, sweeping new series, they recreate the conflict-filled years following one of the first European invasions. Seen through the eyes of a courageous pair of Native Americans, Fire the Sky follows Hernando de Soto's brutal expedition north from the Florida peninsula as the explorer plunders the heart of a complex and fragile civilization.

An itinerant trader and outcast from his tribe, Black Shell was swept into the Spirit World and returned a transformed man. Now, carrying his white-feathered trader's staff, he devotes his life to a sacred mission that only the tall, beautiful Pearl Hand—his lover, confidant and wife—truly understands. Black Shell has seen what the incomprehensibly violent, shining-armored invaders are capable of doing to his world and knows that if his people are to survive, he and his "Orphans," a small band of fierce warriors, must kill as many Kristianos as they can.

After being fought to a standstill by the courageous Apalachee Nation, de Soto has changed his tactics. He will employ promises of peace to accomplish what cannot be achieved by violence alone. Lured by a young man's tale of gold and aided by an arrogant princess's treachery, he makes his way through the beautiful southeastern landscape. One by one, the ancient Nations fall victim to his lies as rulers and commoners alike are tricked into enslavement. In spite of the price de Soto has placed on his head, Black Shell shadows the Kristiano advance and finds that his own legend precedes him. Some will heed Black Shell's strategies of sacrifice and deception. Others will ignore him—and suffer unspeakable horrors as a result.

In this moving, vivid portrait of a lost American civilization and a powerful love between a man and a woman, the Gears illuminate a little-understood time in our history, as this bloody conflict between two peoples hurtles toward an apocalyptic battle that may change the course of the war forever....